A heavy energy prevails during the first week of October, as the normally outgoing Aries Full Moon is sandwiched between stations of Saturn (on September 29th) and Pluto (on October 4th). Then again, the celestial energy is never shining all that brightly this month, and the overall feel might be like jamming on the accelerator with the parking brake on. 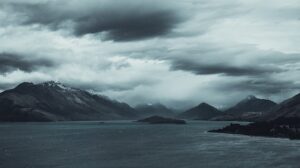 The good news is that both Saturn and Pluto are going direct, and the cluster of Jupiter-Saturn-Pluto that has colored the year will begin to disperse. It may take some time for things to feel lighter, but we are making progress.

The begins with a full moon on the 1st, in Mars’ home sign of Aries. With Venus at the very last degree of Leo, this could be a time for passion and drama, at least within the bounds allowed by the pandemic. Certainly, this full moon encourages us to be ourselves and do what we love – safely.

Pluto’s station to go direct on the 4th could mean that tensions rise towards the end of the week and into the weekend. Although much of the tension will be felt internally – potentially implosive – we won’t have to wait long for the energy to externalize.

That’s because 7th through the 9th sees the bound-up energy finding release, hopefully in a constructive way. There’s some potential for explosions, but it could also help to get things moving if they’ve been a little stuck. The Sun squares Pallas Athene, Mercury opposes Uranus, and Mars squares Pluto. These aspects combine to get us to open up and speak freely – perhaps a little too freely in some cases. We may also feel some hesitation to express ourselves, coming from inner fears or external pressure, but in the end, the truth will probably come out. Mars’ square to Pluto may reignite personal and collective issues that were hot around the middle of August.

The middle of October has some unsettled energy, as the Sun squares Jupiter and opposes Mars, then goes on to square Pluto and Saturn, while Mars steps in to square Jupiter – all between the 11th and 19th. The overall feel is of energy trying to get out and express itself, but being contained in some way (in fact, that’s a good description of almost the entire time between mid-September and mid-October).

Frustrations are probable during this time, particularly in work-related situations, and we’re very likely to see some very explosive energy in the collective, too. The issues themselves have probably been on the table for a long time – possibly all year, but the sense is that we’re reaching a boiling point.

Adding to the mix, or mix-up, Mercury stations to go retrograde in Scorpio on the 13th. As always, Mercury stations tend to feature the most prominent Mercurial mishaps – and especially so when the Cosmic Messenger does the backstroke in a water sign. Just when tensions are reaching a peak, we’re likely to come across misinformation and disinformation. Try not to react right away, as things may not be what they seem on first hearing.

On the 16th, we have the new moon in Libra. Traditionally, this is a time to begin weighing and assessing the harvest of the year, finding its value. This year, we are likely to have some trouble determining the value of our efforts, and we could be unsure about where to invest and divest our emotional, financial, and overall energy. It’s probable, too, that in this pandemic-limited year, we find that our harvest is meager in comparison to expectations. Don’t be too hard on yourself – or others – as most of us have had a hard time keeping up to our usual pace.

That’s especially true of relationships, as Venus will be opposite to Neptune on the 18th. Venus/Neptune aspects can create fantasies, and those fantasies can be bright or dark. Take the ride if it feels good, but don’t invest too much in what happens in the moment.

Mercury opposes Uranus (yes, again) on the 19th, and we get a second chance to express ourselves. We could still be tongue-tied though, and might have to wait until November to really get the message across. There are ideas brewing beneath the surface, so take notes for future reference.

Venus trines Pluto on the 21st and Saturn on the 24th, making this period of time better for realistic assessment of relationships (or in fact, assessment or appraisal of anything).

October ends with a firecracker full moon on the 31st, tightly opposed to Uranus. If the last six weeks have seen us struggling to keep the lid on, this full moon will blow it off. It could make for a fun Halloween, but stay safe, as the energy will be hard for many folks to contain. This full moon is also a ‘blue moon’ – the second full moon in a calendar month.